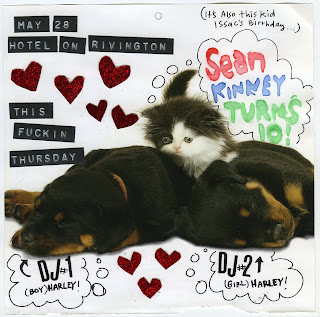 (For all invite-making inquires please contact me)
Posted by lesley arfin at 1:00 PM

This never made it into the zine but... 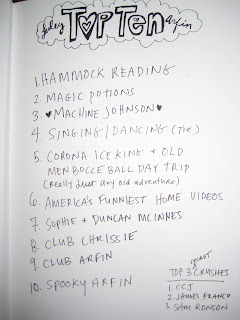 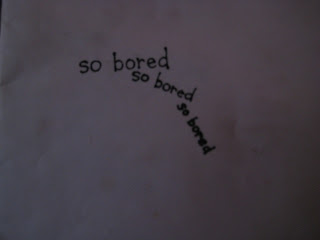 I was cleaning out my draws and found this old zine that Ben Cho put together years ago. It's just a bunch of different people's top 10 lists of whatever. It made me smile big time.

Meryl was drunk when she wrote her top 10 list of celeb crushes... 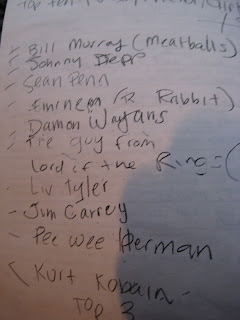 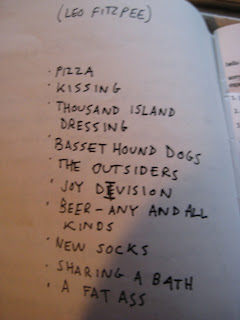 And someone made a clever top 10 list of who should play Cathy in the movie version: 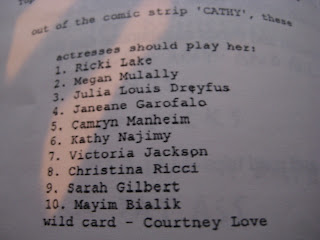 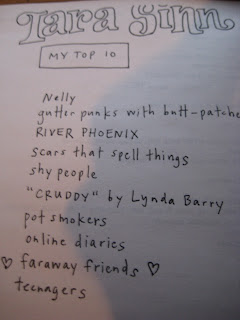 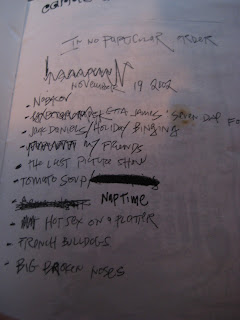 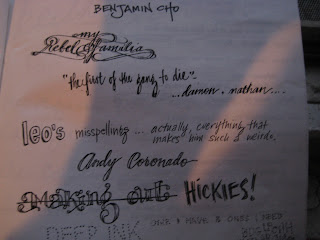 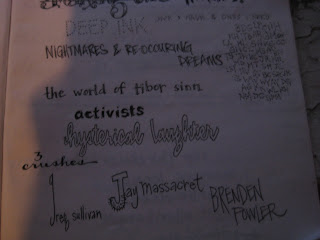 Sorry To Be Such A Downer

One thing that's dawned on me lately is that I should never assume anything. I know that's a pretty obvious thing to say, and everyone "knows that already," but do they? Because I know I totally forget. And just because we want something, doesn't mean we should assume we're going to get it. Even if we work hard and act nice towards others and keep doing the next "right thing" it doesn't mean all of our wishes will come true.

I could've heard this 10 years ago but not have even heard it at all. Time has such a nice/shitty/funny way of proving to us that we get exactly what we need, just not always even close to what we want.

Like don't assume you're gonna be rich. Even if you are right now, or your parents are, don't assume that will always be the case.

Don't assume that drinking everyday is just a phase you're going through.

Fuck the Hamptons, this is where I wanna be:

Things That Are Punk

You might not think this stuff is punk but you're wrong.

(And watch the commenters rip me to shreds.)
Posted by lesley arfin at 9:38 AM

Bill and Gonz made an arty music video. JR is in it. It's pretty.

My new style is being old. Look at what I did this weekend... 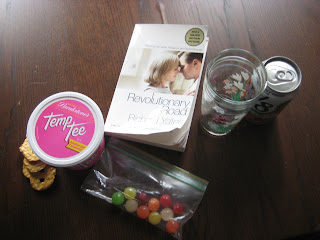 The Temp Tee cream cheese is so necessary when you're eating Pretzel Crisps. The hard candies in a plastic bag are a must if you're gonna be out all day. I carry them in my purse. Veggie juice? Correct.

This was a very exciting purchase for me: 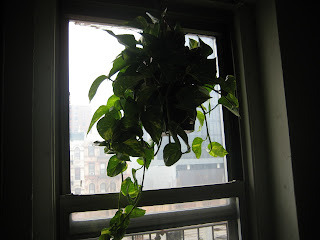 And you can't see the bottom of my nightgown because it's too long! 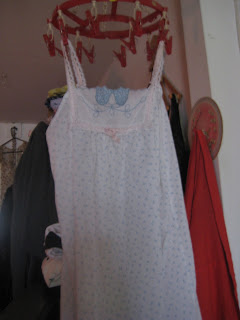 But who cares because sometimes I don't like them. That's how you know what a true friend is. You can go in and out, and it's not that they don't like me, but space is necessary in any relationship.

Sometimes I feel like everyone hates me, but that's only because I'm so wrapped up in myself. Everyone doesn't hate me, they're just wrapped up in their own shit and not thinking about me, which is the duh that slaps me in the face like a splash of cold water every time.

And the bottom line is, I'll never know what other people are thinking. I will never be able to read their minds or get inside their heads, so really, it doesn't matter.

It's actually none of my business what they think. It's also not about me, but about them, their own judgments or hang-ups or whatever.

Someone once told me, "Nothing is ever personal. Nothing." I liked that. I was like "But what if I like a dude, and he doesn't like me? That seems pretty personal." But it's not. It's still about them and what they don't like, or do. And me being me is okay to someone else, and maybe not them. And so it's not about something I lack, but obviously something they lack.

Things I Do When I Can't Write

Tim O'Brien once told our class, "There's no such thing as writers block." I liked that. It's not like writers block is a real thing, it's just that sometimes writing comes easy, and sometimes it doesn't. I've learned that if I push my way through the "block" before I know it, I'm writing again. And another thing, my friend Jonny has this on his wall, is "Don't get it right, get it written." I love slogans made for writers, it makes me feel like I'm in a club.

None of these things make it an easier to write. The only thing that makes writing easier, is writing. NEW SLOGAN ALERT!

Today I feel like I don't have any ideas and I can't do anything. Oh boo.
Posted by lesley arfin at 2:02 PM

Bobby sent me this gem.

I Love This Song

How annoying is it that every. single. mother. fucking. time. somebody brings up Twitter, there's always at least one person around who says "I don't get Twitter. I don't get how Twitter works."

Not "getting" Twitter has become almost as cool as Twitter itself, which is to say, not cool in any way, shape, or form. (I love Twitter btw.)

Anywho, it's like this: You know how on Facebook you can write in what your status is? Well Twitter is JUST that. No tagging or whatever, just writing in a very short status report.

"But I don't want people to know where I am."

First of all, you kind of do. Second of all, you don't have to write where you are. You can write a funny quip or even a boring quip.

When you want to shout someone out or speak directly to that person, you put an "@" before their name. It's not a big deal.

And that's it. That's Twitter. The rest you can figure out on the site which is designed in an easy, soothing, nursery school-like way.

I'm not running an ad for Twitter here, just sick of people pretending to not know what it is.

1. "Everyone is Bi." Remember when you were young and trying to get into freedom? Remember when you thought anarchy was a good idea, or that the 60s were really cool? I don't know, maybe you're younger and never went through that phase, but I was a teenager in the 90s and raving was cool aka taking Ecstasy aka everyone making out with each other all the time. During those days we would make grand proclamations like "Everyone is bisexual," and think we were so smart and ahead of our time. Turns out we were exactly on time. With being retarded. Everyone is not "bi" and those who are most likely live in either San Fransisco or the East Village and attend cuddle parties. Sure, I get the Kinsey scale and sex isn't so cut and dry and all that but come on, chances are, if you're bi, it really just means your gay and/or insecure and just want to keep as many love option doors open as you can because you're afraid to be alone.

2. "Prostitution and weed should be legal." Um, no, they shouldn't be. It's illegality is doing just fine on its own and anyway, it kind of is legal. Weed is legal for Cancer patients, and non Cancers have a pretty easy time of finding it, smoking it, buying it, and not going to jail for it. Don't give me that old hemp argument either. If there even is one. Sounds like a pot invention to me. Prostitution is legal when I ask you to pay me after we do it. Which I don't do because that would be weird. If that shit was legal AIDS would come up so hard it would literally take the shape of a human and be able to put a top hat on and ask you for change. This is not a liberal ideal, but a teenager's idealistic view of how the world would be better.

3. "I'm gonna live close to all my BFF's, we'll all have kids at the same time, and they'll all play together and become BFF." Not really. It goes more like this: Your husband or wife becomes your BFF and then you have a kid. You try to find people in your neighborhood who have kids and you become friends with them (slim pickins). The only thing you have in common is that you're both married and have kids, so you talk shit about most of them and you suddenly feel very similar to how you did when you were 16 and came up with this original concept. The 16 yr old plan is really good and it would work if we weren't so broke aka lazy aka spoiled. My parents lived close to friends and all us kids are around the same age, but I'm certainly not BFF with them and my parents are divorced, and I guess I'm spoiled and lazy, so maybe it's not a good plan after all.

4. "There's no such thing as monogamy." I'm still on the fence about this one.
Posted by lesley arfin at 2:39 PM

It's so sad, the Lunachicks myspace page only has 265 friends! Their videos ain't that great either, and also few and far between. We miss you Lunachicks. You came outta your faces on a daily basis, but you were still tight as fuck.
PS Squid has 2 baby girls now, Rio and Pepper. CUTE ATTACK! 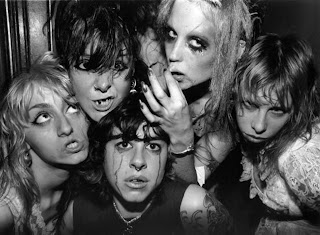 "Our songs are about people we love, people we hate, TV shows we love and...killing people."

These girls look like they had some good old fashioned fun.

Lissy Trulie and the Foxes

This is Lissy Trulie's new video and all my favorite girls are in it: Chrissie, Cassie, Harley, and Jen.
(And Chloe is the merch girl!)

Ever see the movie Foxes? It's like that but better.

I got tired of doing the blog because I felt embarrassed by it. Every time I took a picture it was like "Is this gonna be on your "blog"?" or "Take a picture of me for your blog!" And Sally said "You should keep doing the blog because people want to see pictures of you and your famous friends." And then when I wrote something even my family members were like, "Oh and I read your blog..."

It's not like anyone is at fault, I'm the one writing of course. I guess I either just assumed no one was reading it or if they were, they wouldn't say anything. I don't know why I thought that.

I got laid off from Missbehave. For two weeks I haven't been working, haven't been writing anything, and so of course all these feelings are balling up and where do I put them? I feel fucking pissed! People ask me all the time boring questions like "What do you think of blogs and people writing confessional stuff, thinking their thoughts are important and blah blah blah..." and the answer to that is, I think it's fine. If you don't wanna read something cuz you think it's gay, you don't have to read it. And if you wanna write about yourself because you think that what you think is important, you're right. You are as important as the next person, which is to say you are very important, and also pretty insignificant as well. There are a lot of fucking people in this world.

I'm pissed I got laid off. Of course it's not "personal" and money is tight and all that, but it's hard not to feel that way. It's hard to act like you're still friends with someone when you're not. It's easy to forget how little control we have over the way others act. We have no control. Not even a little.

Feeeeeeelings. I filed for unemployment and Sam went to Jamaica. I'm not blogging on Missbehave anymore. My life is up in the air and I couldn't be more grateful, more excited, because now, it's like, REALLY on.
Posted by lesley arfin at 8:54 AM