Please Turn This Into An SNL Sketch

Thanksgiving is good, but Christmas has better songs

You might recognize the two people in this video as my friends Bill and Merks. Just kidding but how good is this song/dance moves/outfits?

Thanks availaBILL
Posted by lesley arfin at 8:03 PM

Am I late on this bit of awesome?

Do you have an awesome scar that can be accompanied by an even awesomer story? Please email me@lesleyarfin.com

I wanna interview you!
Posted by lesley arfin at 6:41 PM

Sometimes I think as a writer I have to pigeon hole myself into a certain category, and if I don't fit into said category, I'm a failure.

I feel like a lot of my closest friends are constantly telling me to write a screenplay, yet most of them don't even read this blog. So why would they want me to write a screenplay? It surely can't be because they love my writing. I think it has more to do with the fact that I'd sound a lot cooler as a friend if I was a screenwriter.

Make that a successful screenwriter. The buzz of Hollywood. BFF's with every buzzworthy screenwriting name. My scripts would be so funny and awesome. I'd lunch with the Apatow's and have slumber parties with The Fempire.

I don't mean to sound like I'm dissing those people--why would I? I love their work just like everyone else. But am I nothing if I'm not a success? Does it not sound cool enough? You can't name drop me. You can't make yourself seem cooler cuz you're BFF with me.

And then there's the book scene. I'm sure whatever I write will never make it to the NYT book review. I'm pretty sure my poems aren't getting published in The New Yorker anytime soon. I didn't go to an Ivy League school and I don't plan on teaching at one either. I barely went to college. I barely went to high school!

I knew when I was 16 as I do now, that the hierarchy of what we were all dealing with back then would follow us around forever. In the office, at the meeting, in the scene. It's The Breakfast Club wherever you go. What I didn't realize was how cool it would be to be uncool. Nirvana had to come along in the 90s and ruin that for everyone.

I know rationally that I am what I am, etc. But still I'm not immune for wanting to be a cool, awesome, successful, paid person. Just "wanting" that doesn't really mean anything though. I can take action, and even if I do it's still not a guarantee.

I know logically not to measure my worth by who wants to be my friend or how big my apartment is or whether or not I'm the toast of the town, but I'd be lying if I said that my work doesn't get caught up in this kind of spiderweb of thoughts.

It is a spiderweb exactly. It's fucking sticky and enticing and I'm pretty sure that if I don't get myself out of it, I'll be eaten alive.
Posted by lesley arfin at 11:22 AM

I actually don't believe in a "jinx." Is it a hex? Is a ghost or a witch secretly plotting against me (maybe). I do believe that what I really mean to say is "saving face" and how embarrassing it can feel when said face is covered in shame. Just in case the really exciting thing I'm excited about doesn't happen, I don't want to feel stupid and be the boy that cried or wolf. Or in this case, the girl that cried TV show.

Yes that's right, MTV has optioned the rights to Dear Diary for TV. Yes it's fucking awesome! But really, you know how these things go. I guess I won't really be super excited until I'm on an actual Dear Diary The TV Show set. Sometimes these things don't happen, and if they do, the idea that it might even be a good show that goes to series is kind of one in a mill. But it is a high honor nonetheless. So jinx or no jinx, how about I just feel siked for a wee minute?

Another cool thing that I'm doing is getting my counseling license. It isn't the coolest job in the world or anything but it's something I'm really interested in and have been wanting to do for a while. It's specifically drug/alcohol counseling. It seems like a pretty dark career choice but I'm ok with that. I really like the TV show Intervention. It's so good right? Anyway, I know I will be really good at this and maybe one day I will go for an MSW or PHD but who am I kidding here? Probably not. MAYBE!?!?! WHO KNOWS!?!?!

Another thing about something good happening is the fear that people are wishing I will fail because there's that quote "Whenever a friend of mine succeeds, a small part of me dies." It's a funny quote though and yeah jealousy and envy are real things, even when we are totally cool people who are nice 99% of the time.

There is a fear I have that those negative thoughts people have suddenly go viral and before you know it, not only do I not have a TV show but I have nothing. And I'm poor and alone and old and no one likes me anymore.

I know logically I don't REALLY believe this to be true, but since when did logic have anything to do with anything anyway? Aside from math and driving.
Posted by lesley arfin at 1:00 PM

Many people have style icons, and that's cool. My style icon is Lizzie Bougatsos from Gang Gang Dance. It's not because she has a dark, weird, punk style (although that don't hurt), but more because she has the rare ability to throw on anything and make it look good.

First, she is beautiful. She sort of looks like that actress Laura San Giacomo from Sex, Lies, and Videotape. 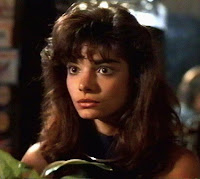 Second, have you ever seen Lizzie perform? She was made for the stage. Her voice is like a combo of Kate Bush and Betty Boop. She dances like a ballerina on a lot of coffee. And Gang Gang Dance is also just a really good band. When Lizzie performs I can't take my eyes off her, even if she's just dancing around on a regular dance floor. Watch her play the drums! I dare you to take your eyes off of her! (note: this isn't the best live video of GGD because their sound was fucked up, but watch her drum in the beginning of the song).

So I have known Lizzie for a few years now, and we're both from Long Island and that's a big plus for me in terms of friendship. Even when she's just wearing a t shirt and jeans she looks great. She can be wearing high end, or something she bought off Orchard Street and I wouldn't know the difference. Her hair is like a pile of black ribbons and even when it's a big old mess, I can't tell if it's intentional or not.

A lof of people drool over expensive clothes, but I don't think that's what makes good style. I think it's the ability to pull off something casual, normal, ordinary, and/or inexpensive and make it look fabulous. That's what Lizzie does and I salute her for it. 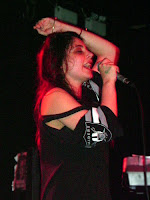 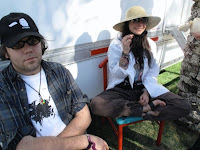