A lot of people think travel isn't such a big deal. Even if it's for a long time, let's say, 2 months, people are still like "Oh it will be great" and "what's the big deal?"

They are right on both accounts, and while they obviously don't know that "it will be great" I'm willing to believe them and feel the same way.

HOWEVER, on Thursday I'll be leaving for LA for 2 months. And yeah it's not a big deal and it's gonna be great, but I'm pretty nervous. Here's why.


1. I'm Not The Bad Ass You Think I Am: Wait, do you even think I'm a bad ass? I don't know. But I'll tell you right now that I might not be. The first reason for fear is always fear itself! It's like, "Okay so I'm scared, check" but then the following thoughts are "what if the fear never goes away?" There's always the nightmarish fantasy of going to a place and suddenly your arms and legs won't move and it feels like there's gum all over your eyes and I'm just totally paralyzed by the fear of nothing. You know what I mean? I logically know that's not gonna happen, but the anticipation of feeling even more scared, well, it scares me. People say "Say positive" but sometimes that comes off as sounding dismissive. As much as I'd like to believe that I'm secretly a punk rock freight train hopper who lives each day like it's an all ages show, I am in fact quite not that at all. My ego puts up with a lot of eye-rolling when I talk about being scared of stuff, but whatever, it's still a thing. My moral code might have a dyed blue Mohawk but I'm still a human retard sometimes.

2. I'm Not Popular (yet) In LA: I've lived in NYC for about 10 years. I wear my housepants to the bar like it ain't no thing. It's because I feel comfortable here and people know me. All the crushes I'm ever gonna get within a 5 mile radius have been crushed and put away. Finally, after 31 years, I can just do me. It feels different having to do that in a whole new place. What if I'm a dork there? Wait it just occurred to me... What if I'm a dork HERE? Okay, next.

3. Although I Grew Up Driving, I'm Still Scared To Do It: You know what I'm talking about. I don't wanna die, kill someone else, get a ticket, or try to parallel park in front of a group of people. I think about this stuff a lot.

4. Boyfriend: Truth be told, a huge part of why I'm going is because I like a boy. We've spent some time together and even though I've gone through an excruciating break up this year, I couldn't be more siked. There's still the "what if" factor. I'm not gonna think about it so much. Don't think. Stop thinking. It's gotta be the bumper sticker in my brain right now. That's all I'm gonna say about this for now.

I wanted to write this stuff down and get it out of me because I'm sick of living with these thoughts. I'm not even going for that long. Also, I'm totally fucking stoked.

I'll miss you hot summer New York nights. I'll miss you little apartment and little cats around my neck. I'll miss you Miguel from the deli who gives me free cigarettes. I'll miss you buying a bagel and Snapple and Sour Punch Straws at 2am. I'll miss you Merks and Bill and Gav and Em and Judi and Jen and Xrissie and Elizabeth and Natasha and Bones.... so much. And everyone else. Come visit me. Now.

Grease Is The Way That I'm Feeling

Her hair was blue, now it's green. I like her mind, she hates the scene.

Elizabeth and I started a new blog about the 90s. The REAL 90s. We're sick of the kids raping our youth and wanna set things straight. Check it out. 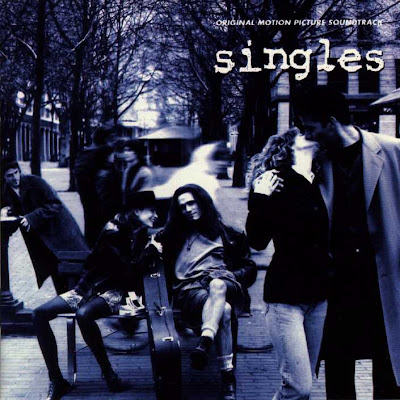 So it's 11pm and I'm still at the office with Elizabeth. We got so heavily sidetracked in a 90s conversation that I can't even go into full detail about it because it might just be THE most important conversation I've ever had. Like way bigger than I can deal with right now (note: Urge Overkill and Soy Bomb were mentioned).

But as we were talking about all the places we would see shows (yes to the Academy, no to ABC No Rio--way too scary. Scary as in intimidating. Crusty punks! God Is My Co-Pilot! Too much for little suburban girls). Another place she was scared of was Coney Island High, but I wasn't. I used to go there all the time. They had that soul night that was later moved to Bar 13 but I forget what it was called.

Anyway cut to December of this year. I went to get a tattoo with Judi (we only go to Michelle Tarantelli btw) and there were people hanging out, whatever. At one point someone said my full name and this girl Hilary was like, "Wait, did you say your name was Lesley Arfin?"

And then she was like, "Dude, I have this sign from Coney High Island that I took when it got shut down. It says "Lesley Arf Nuts" on it and I've been looking at it every day for years, wondering who you were." 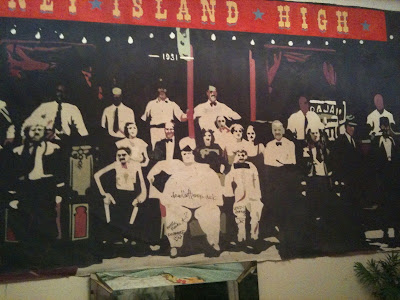 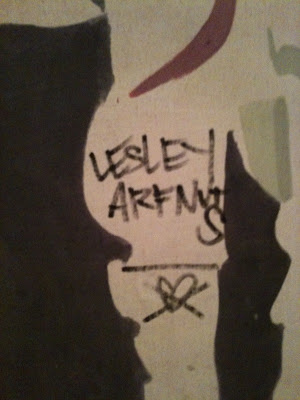 I guess if you look closely you can also see that I wrote "Bottle Rocket" and "Rushmore"??? I don't know. I was being a nerd I guess.

On top it says Dave Eliot.com or something and that was this dude who I thought was cute but he was also really cool and wasn't into me. That's fine.

I haven't updated in a while because I've been feeling extremely vulnerable. Overly emotional. Do you ever feel that way?

It's not so much depression or anxiety (right now) just a protective shield I need to use. It separates me from my friends, from other people, and from writing on my blog.

I don't feel lonely. I do cry when I watch Glee. I do cry a lot. I swear it's not because I'm a huge pussy. I'm not a huge pussy, just a regular one.

Right now I really do wish I was able to write/talk/explain a lot but I'm just not ready. I feel ashamed when I get too emotional. I feel lame when I expose too much. It's like I'm almost too tough right now for my own good. I don't like it.

It's vulnerable. It feels fucking vulnerable. So I'm just gonna step away from my desk right now and walk down the street and let life happen the way it's supposed to happen so I can eventually make my way back to whatever the fuck it is I should be writing. With more clarity and less self conscious.

I have a deeply inner sad "I'm fucked" feeling, but on the flip-side I'm pretty sure that's the feeling that happens before things get good.

Ugh sometimes I just hate myself.
Posted by lesley arfin at 2:18 PM

Who, I don't know, is just this random awesome dude who is helping me out with a car this summer. Oh and he made this too: 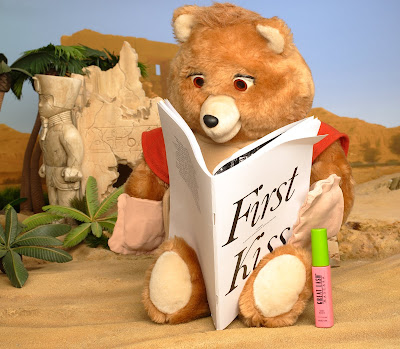 I DARE YOU TO QUESTION WHETHER OR NOT THIS MEANS EVERYTHING TO ME!!!


Elizzzzaaaaabbbbbeeetttthhhhh what do we do about this?!?!?!
Posted by lesley arfin at 12:09 PM

where the day took me

As you may have heard by now, Chloe showed her new line for Opening Ceremony yesterday in NYC. She got all her friends to be the models. I was one of those friends. FUN ZONE.

I want to own everything in the collection. All the dresses are pretty, comfy, and to quote my own self, "movable." I especially love the leopard print and the navy with white polka dots. Here, I'll just show you with pictures...

This is Dakota and she's wearing leather shorts that also come in white, but they are buttery soft and very..."movable." She's also wearing a crop top but most of the other t-shirts have Gothic kind of prints that remind me of Morrissey songs. 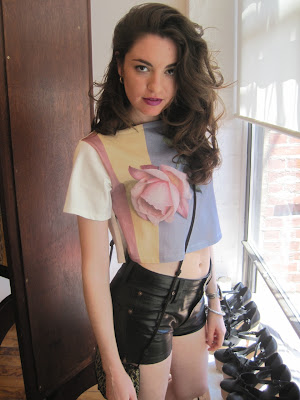 I think Carol looks really pretty in this print medley, and a little perfect navy cardigan is not always as easy to find as one would think. 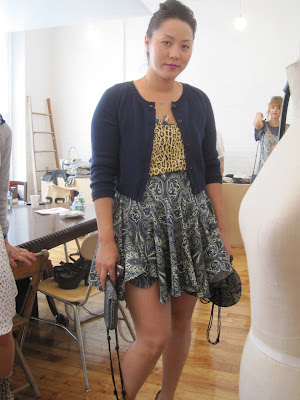 SHOEGASM! Strawberry socks, models own. (*Side note: there is an actual store on 6th ave called Shoegasm and it's kind of really good). 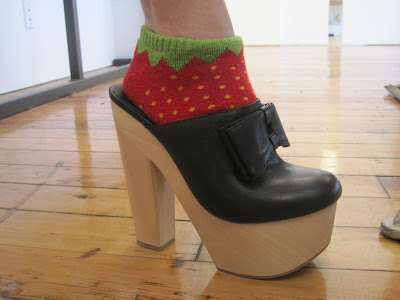 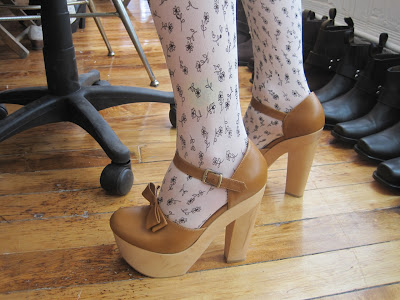 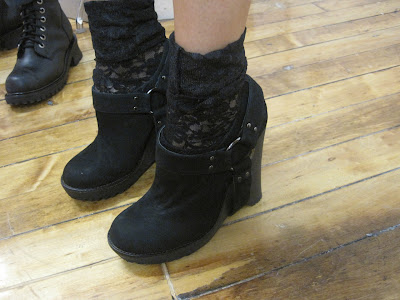 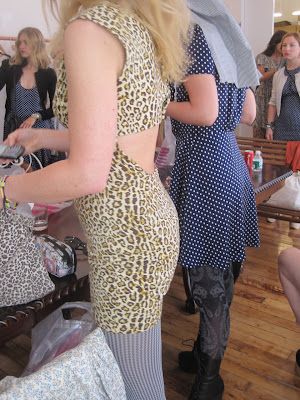 I loved Anna's outfit because it included every print. 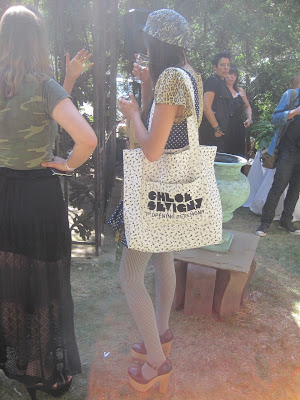 I wore one of these varsity jackets too. They're reversible so your dream of owning a rayon leopard or polka dot or black or gingham varsity jacket can now become a reality. 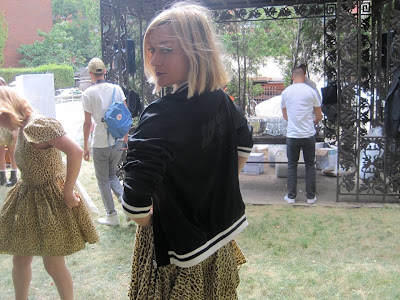 The food had a Marie Antoinette stee. 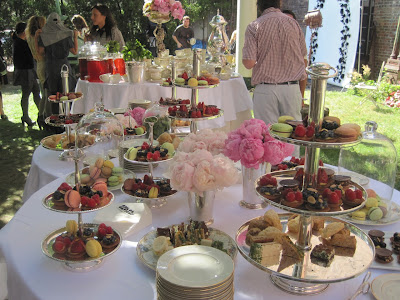 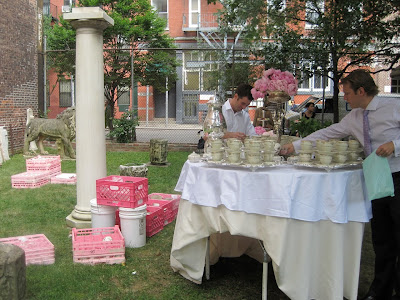 Not sure if you can tell, but my sunglasses have hearts in the eyes. HEARTS IN MY EYES!!! In other words, if you have a crush on a girl and you want to get her a present, bingo! 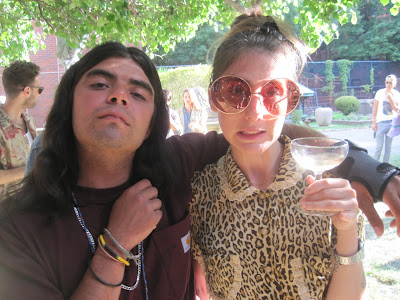 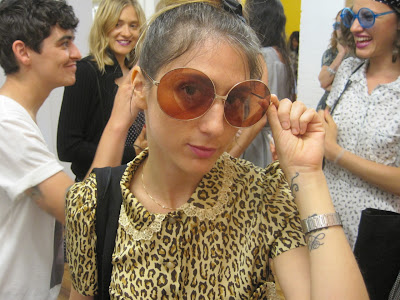