I just got back from Mexico. Maybe I was sleep deprived, but tell me if your brain wtf's this as much as mine did.

I guess having to be at the airport at 4am didn't help, but I was kind of hungry and thirsty and usually I just depend on the kindness of airport McDonald's breakfast to help me out. Instead I saw this place: 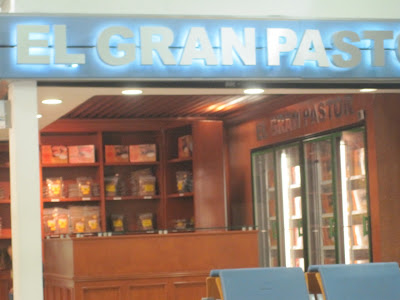 Hmmm. Interesting. Looks like they're selling bags of hay and old TV dinners...

Upon closer inspection... what a shocker: 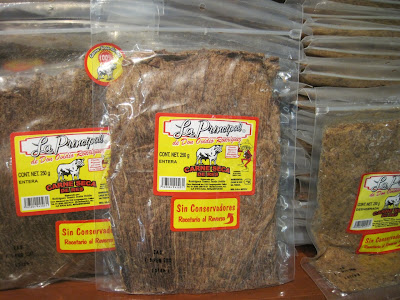 It's either old hay, cow dung, or a bag of hair. Yum, appetizing. I can't wait to eat this on the plane?

You know what I can really go for right now? A box of steak from 1978. 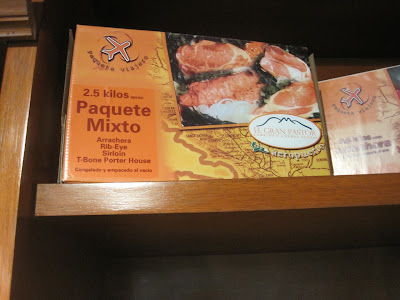 I then saw there was a candy shop open so I meandered my starving ass over there. Just in case you forgot, this is what candy usually looks like in my brain: 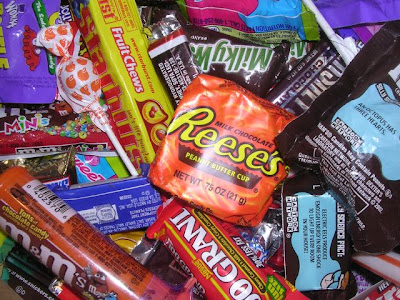 But I guess this is what candy looks like in a Mexican persons brain: 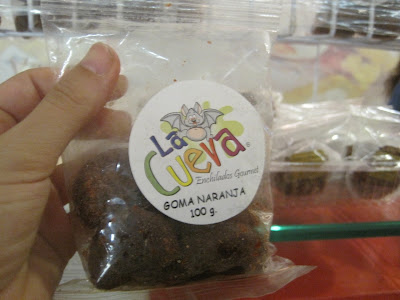 A delicious bag of doody balls.

Imagine if someone gave you these on Halloween: 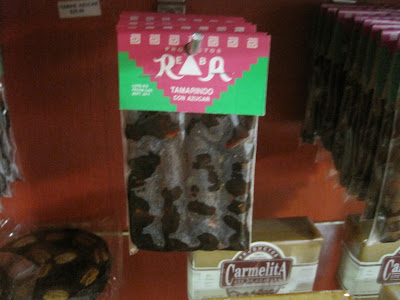 Can I have some more candy flavored baby food please? 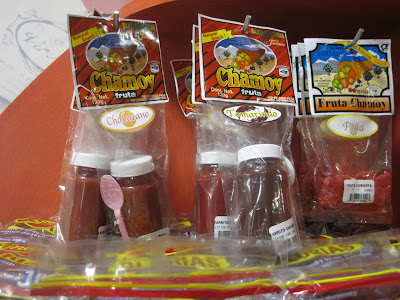 I'm really in the mood for a black pinwheel with nuts on it. 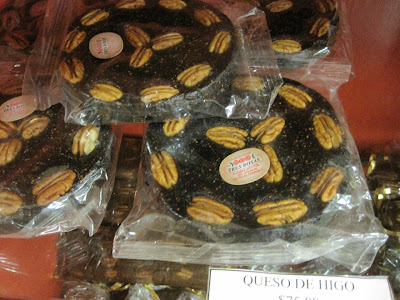 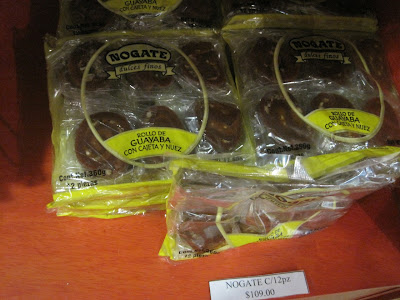 Today was a great day in LA.
I actually drove past "Melrose Place."
Then when I was driving down Sunset, "Hazy Shade Of Winter" by The Bangles came on the radio and it was just like Less Than Zero. There were palm trees everywhere.
I also found (after a month of having this rental car) a secret button makes Sirius radio happen.
Score!
And tomorrow I'm waking up at 4am to go to Mexico. WOW! 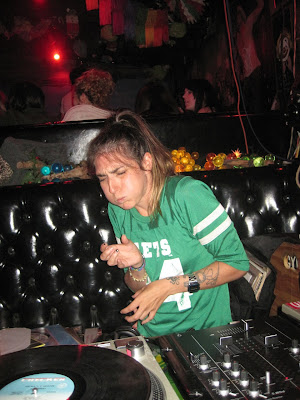 The Groupie Chronz: I'm Not With The Band

I posted this on buzznet but thought I'd share it with you guys as well. What happened is that I got the chance to hang around a band. I got to win my way into their hearts, or at least try, so I figured I'd kill two creative birds with one bedazzled stone and write about. (I'm not sure why the stone is bedazzled, but let's just run with it). Now that I think about it, befriending a band isn't really being creative. So I just killed one creative bird.

Can you tell I'm tired? IT'S NO EXCUSE.

Anyway, here's part 1 of The Groupie Chronicles. Hope you likey.

Sometimes I moonlight as a groupie. I'll admit it. It means I go out with dudes in bands (well, there have only been 2 of them to be exact).

You might remember my first epic groupie adventure from this blog

And maybe my second groupie adventure could be just moving to LA for the summer, but I'm not gonna count that.

I was supposed to go to Comic Con today with a band but when my boyfriend overselpt, I got kicked outta the van.* He was stressed for time and I don't think me saying "wait, I can't find my phone!" really helped much. Needless to say I never made it to Comic Con.

So instead I went shopping. I drove to Sunland thrift only to find zero things. Then I went to a store called Driftwood on Sunset and got this skirt. It's pretty I think! 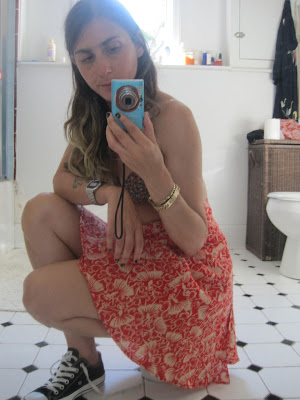 I can only use this groupie chronicling as a learning experience.

1. If the band needs to wake up on time, be the type of groupie who sets a second alarm just in case.

2. Be the type of groupie not to forget anything, and if you do, don't tell the band. They don't wanna hear it.

3. Don't stay mad. Groupies should live like free birds. Let go, move on to the next groupie adventure.

* Please note that my "kicked outta the van" statement should be stricken from the record. It was an exaggeration on my part and my boyfriend is nothing but a sweet sweet guitar playing lovebug who also happens to be extremely determined and hard-working, while I am just merely along for the ride, in whatever vehicle (metophorical and literal) that will take me there, if I'm lucky. 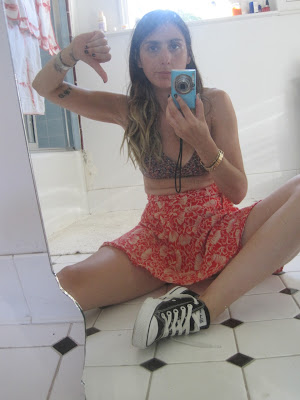 Love Was A Dangerous Angel

I went to the screenplay reading of Weetzie Bat last night at Book Soup in LA. I wore this outfit because I thought it was Weetzie-esque. The thing about LA is that wearing anything other than flip flops makes you feel way overdressed. So that happened. 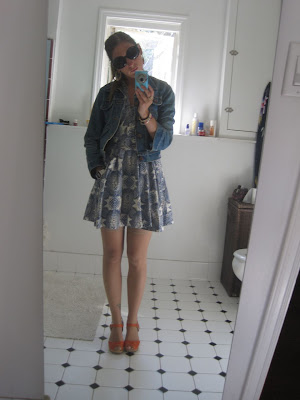 If you don't know what Weetzie Bat is, click here and here. Or I'll just tell you. It was a seminal young adult book series I read in high school. A lot of alernative kids were into it.

This was sort of a big deal. Girls with black framed glasses having only been dreaming about what this book would be like as a movie since 1995. Now those girls are older and wear contacts. Still, Weetzie will always have a cult following. Like this young lady: 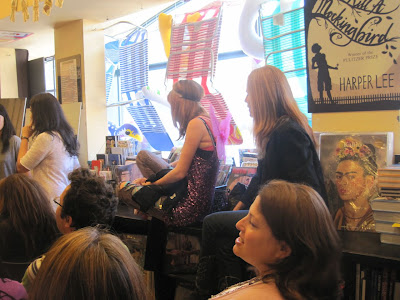 This girl showed up too. She looks just like what I wished I looked like in the 90s. I was trying not to be too creepy with the camera. 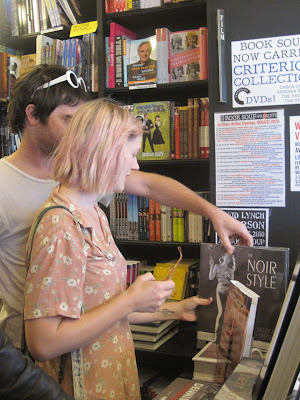 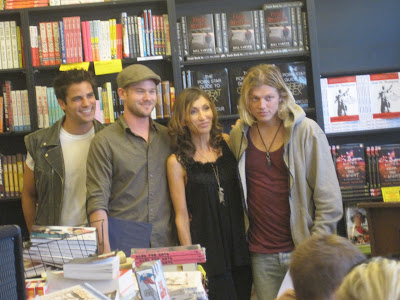 
Does this gal look familiar? She was only Dottie in Pee Wee's Big Adventure, the friend in Valley Girl, and the singer in the band that played at the dance in Better Off Dead. 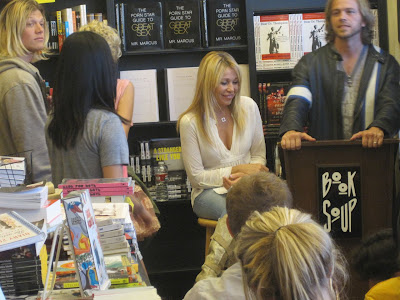 She sang an acoustic version of "Send Me An Angel" that started out with a douche chill, but ended with just a regular chill.

Look at the girl who played Weetzie! Ain't she cute? 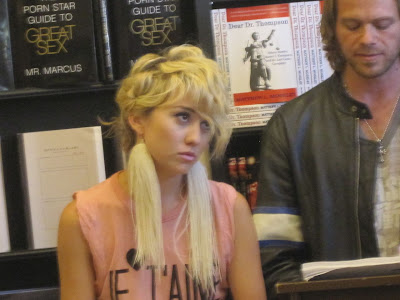 Overall I'd say that the script was actually pretty cute. I especially liked the part when Weetzie and Dirk went to the Jane Mansfield fan club party. I left early though because the girl next to me passed out and I let her mom take my standing room spot. I bought a book and left. Plus listening to people read scripts makes me feel weird.
Posted by lesley arfin at 9:53 PM

I'm Going To This 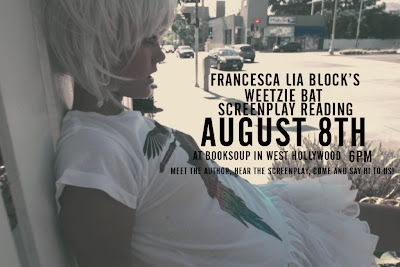 I hope it's not too packed
Posted by lesley arfin at 8:18 PM

I've been having a really hard time lately, mostly it has to do with work (lack thereof). I'm not sure if this is the sort of thing I'm supposed to admit to the public or not, like does it make me seem less successful/competent? Probably.
It's the lack of confidence that leads to not being as prolific as I would like, and that's just where I'm at. It's a catch 22 because when I get more work it enables me to be more prolific, and as a result I feel better about myself.
When the opposite goes down I feel worthless. I feel like there's no reason for me to even exist and no words of encouragement can fix the feeling. Yeah I'm dramatic and sometimes throw my own pity parties but I don't care.
Not every weekend is a party. Not every outfit is a winner. It's hard for me to write and pretend otherwise.
I know this sounds gloomy. I'm harshing your mellow and being Captain Bringdown.
Let's all complain and close the curtains so no light comes in. Lock the door and sleep all day and don't wear makeup and don't answer the phone and delete yourself from Facebook and when someone tries to cheer you up don't even let them.
Do it now.
Do you feel better?
I do.

(Another thing that helps is listening to this Buzz Bissinger podcast, thanks to my boyfriend for showing this to me).

In happy news, I went to Palm Springs last weekend where it was 107 degrees (I liked it). It was hard to sit in the sun but I managed. I needed to show off my Budweiser bikini. Reason #1 for happiness. 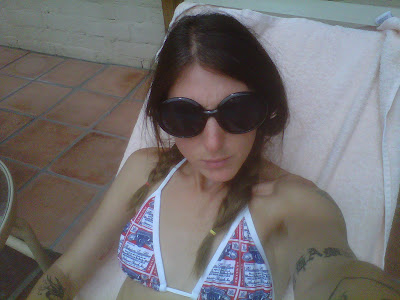 Reason #2: Local cover bands. They played "Boys Don't Cry" and "American Girl." I danced around in circles and pretended I was in an episode of Rosanne. 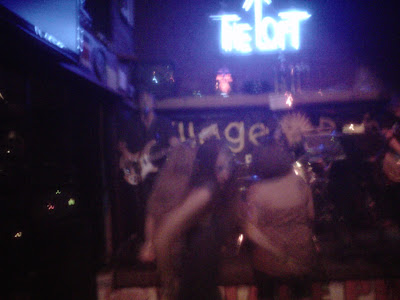 Reason #3: Gay men. They all live in Palm Springs and they are mostly bears. I went into a sex store called "GEAR" and found this not so subtle lubricant. We also went to a gay club where I drank many a Red Bull to the sounds of Lady Gaga, Katy Perry, Rihanna, and Madons. T'was totally ruling. 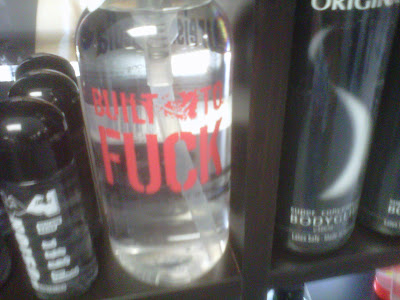 All these photos were taken with my Blackberry because I forgot my camera.
Posted by lesley arfin at 5:00 PM